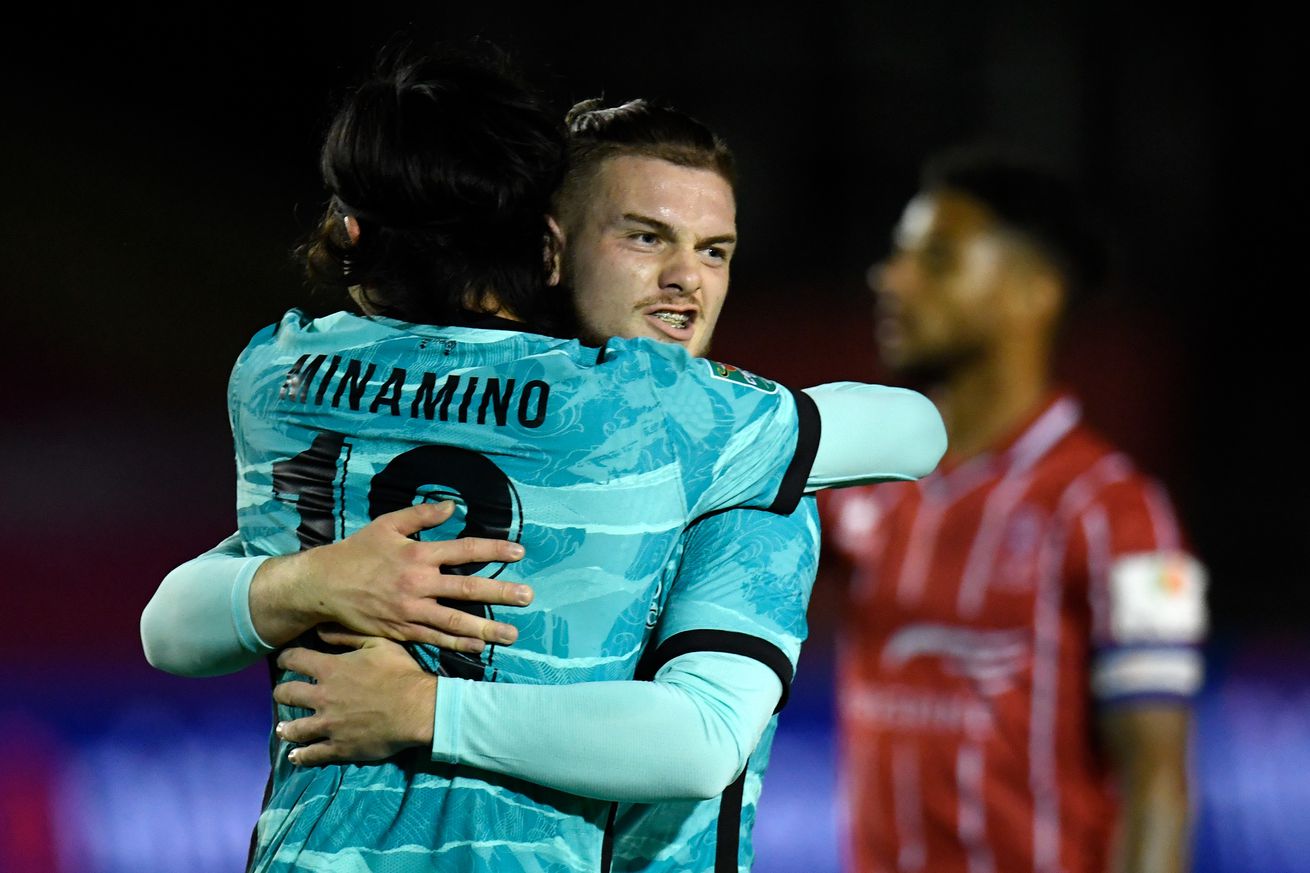 Liverpool’s reserves impress from start to finish against Lincoln City.

Although assistant coach Pep Lijnders promised a strong lineup, it’s quite the mixed bag. We have Virgil van Dijk—making a rare domestic cup appearance—leading out the team. The big man will be paired with youth team player Rhys Williams, who is getting his senior team debut. He’s one of two Williams’ in the backline, alongside Neco. Newboy Kostas Tsimikas gets the start, and other new signing Diogo Jota is on the bench.

Further up the pitch, Xherdan Shaqiri appears out of nowhere to get the start. Curtis Jones, Marko Grujic get the nods in midfield. And Harvey Elliott and Takumi Minimino will hope to impress tonight. Divock is going to Divock. And Adrian is going to Adrian.

It’s a bit of a mad lineup and this could end up being any score. Should be fun.

GOAL! Shaqiri will not be denied! Curtis Jones won a free kick just outside the penalty area after beating his defender with a cleaver turn. The Swiss journeyman lined up the ensuing free kick. Shaq probably struggles to score that one against most Premier League keepers, but this is a League 1 team with a League 1 keeper. Shaq bends it up and over the wall, and easily beat the keeper to the near post.

This makeshift Liverpool side is quite entertaining to…wait a minute…

GOAL!! Harvey Elliott either does brilliantly to close off the passing lane, or gets lucky with a terrible pass. Either way, he cuts out Lincoln City’s attempt to play out of the back, and immediately tries to play Origi in. His initial pass is cut out, but the ball falls to Minamino just outside the box, and he fires home a screamer.

As I was saying: this makeshift side is quite entertaining and surprisingly composed in the early stages. Sure, it’s just a League 1 side, but how many weakened Liverpool sides have we watched struggle against lower league opposition over the years?

GOAL!!! Brilliant play all around. Rhys Williams picks out Divock Origi with a long pass into the box. The Belgian cushions a header into the path of Curtis Jones, who takes a touch, works some space, and fires past the keeper.

GOAL! Another for Jones! Elliott picks him out at the edge of the box, and the Scouser turns his defender and fires off a shot. It takes a cruel deflection to wrong-foot the keeper, but that might be doing the keeper a favor at this point.

Adrian is finally called into action as halftime looms. The Spanish backup goalkeeper does well to be alive to the danger, and pushed the effort from a tight angle around the outside of the post.

Fabinho comes on for Van Dijk and..

GOAL! Liverpool make it 5. The Reds win the ball up high, almost immediately from the kickoff. Elliott is played through, but a last ditch tackle denies the young attacker his goal. However, Minamino picks up the scraps, to score on an empty net.

Other than the goal, Lincoln city have come out with much more attacking intent, and have already tested Adrian a few times in the opening 10 minutes of the half. Props to them for continuing to play (even if it could hit double-digits at this rate).

In other news: CAPTAIN DIVOCK ORIGI.

This is exciting, not that we need another attacker to come on, but Diogo Jota makes his Liverpool debut. Harvey Elliott—who was brilliant tonight—makes way.

Goal. Lincoln get their goal, and it is deserved. The Williams’ conspire to make a mess of things defensively, and Lincoln City create a good chance which they convert.

GOAL! Grujic makes it 6 with his first—possibly last—Liverpool goal. It’s a short from outside the box. It wasn’t particularly well struck, but a slight deflection just takes it away from the Lincoln goalkeeper.

Goal. Lincoln score off a corner. This game is crackers.

GOAL! Captain Divock Origi makes it 7 with a hard-struck ball from just inside the area.

The ref adds 3 minutes for some reason.

That was fun! Even with a weaker lineup the gulf in class was massive. On to the next round!