ICE Cube Kushner & Trump – CWBA & MAGA Has Ice Cube Joined Trump ? He Sure has but For The Black Man’s Sake He Says

By admin in swordpress on October 18, 2020
Spread the love
thanks for the views we appreciate : 68

Rapper Ice Cube once said he would never endorse Donald Trump. And though not an endorsement, the rapper is causing a stir this week 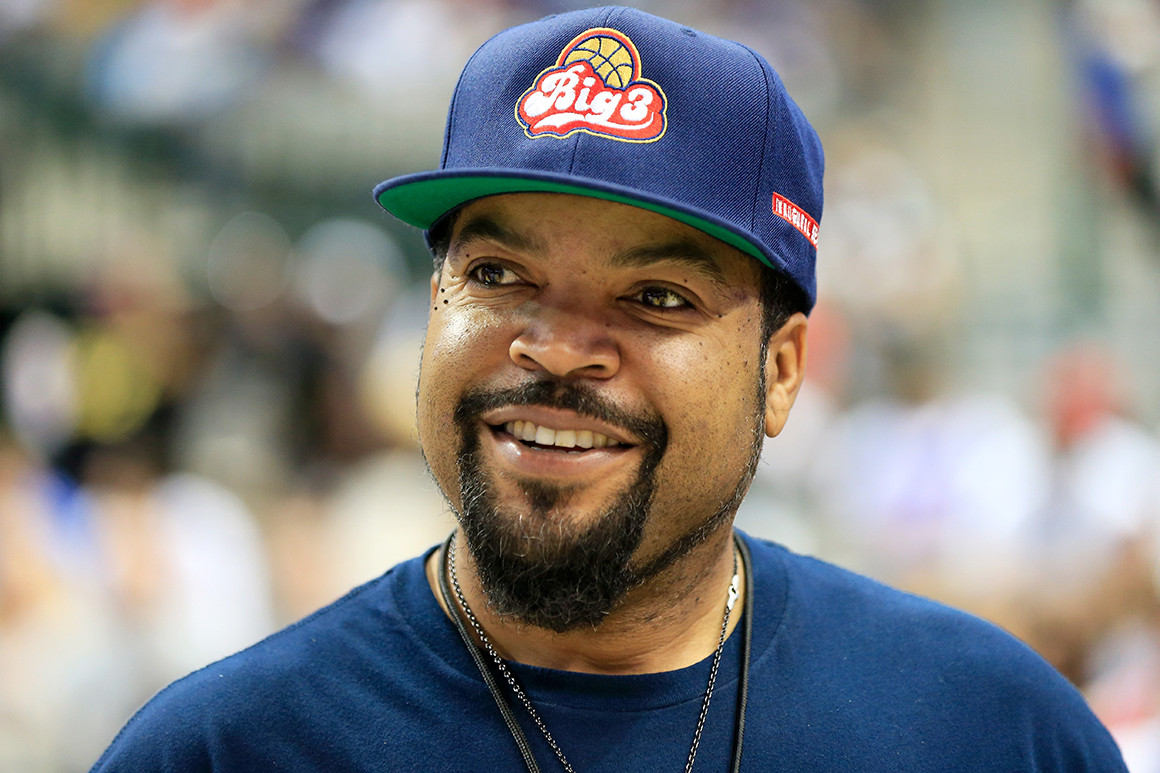 The inside story of how Ice Cube joined forces with Donald Trump
An unlikely partnership on a plan to lift Black Americans economically was months in the making.

Ice Cube
The White House engaged in a weeks-long courtship of Ice Cube, a transformational figure in the rap world as well as mainstream Hollywood. | Ron Jenkins/BIG3/Getty Images
This is the story of how Ice Cube wound up in a room with Jared Kushner less than two months before the election — then locked arms with Donald Trump in a move that delighted the president’s supporters and angered many African Americans.

Late last month, the iconic rapper quietly slipped into Washington, D.C., for a three-hour meeting near the White House with Kushner and other senior advisers to Trump. After a summer of racial unrest, Ice Cube was promoting a “Contract with Black America” to help lift African Americans economically. He wanted the administration’s ear.

Eager to siphon off a slice of Joe Biden’s black support, Trump had been wooing African Americans for months. Landing Ice Cube’s endorsement was a stretch, but a collaboration with the famous rapper would still be a big get. Even heading off an Ice Cube endorsement of Joe Biden would send a message, Trump allies thought.

After that sitdown, White House aides went back and forth with Ice Cube over his 13-point blueprint — parts of which they agreed with, others they did not. But a few weeks later, when Trump released his own proposal to boost African Americans, it included Ice Cube’s biggest ask: a $500 billion capital infusion into the Black community.

After the Trump campaign revealed Wednesday that Ice Cube had helped shape the president’s plan, an array of Black commentators responded with fury. Touré said the artist was “being used”; Roxane Gay asked: “How … does the guy from NWA become MAGA?”

A person familiar with the discussions said Ice Cube touched base with Biden’s campaign, too, but received only a vague commitment to have “a seat at the table” if the former vice president won. So Ice Cube moved ahead with Trump, saying he would take political support from anyone for his plan, regardless of party.

The White House engaged in a weekslong courtship of Ice Cube, a transformational figure in the rap world as well as mainstream Hollywood. Trump aides had invited Ice Cube’s representatives to the White House and heard them out on conference calls, at least one of which included the performer. There was a lunch at the president’s Bedminster golf club with Ice Cube’s manager.

The endeavor underscores the extent to which Trump has made outreach to Black voters a centerpiece of his reelection bid. The president is waging an uphill effort to improve on 2016, when he received just 8 percent of the African American vote. While Trump’s advisers concede he’s unlikely ever to win a substantial amount of Black support, even a small uptick could sway the outcome in a close swing state or two, they say.

The talks began in late August, after Ice Cube took to Twitter to promote his newly released plan. To the surprise of the president’s aides, it seemed possible the 51-year-old entertainer and businessman, who earlier this year called for exempting African Americans from paying income taxes, would be open to their overtures. In a video released alongside his proposal, he said he’d been watching the Democratic National Convention and that “from the way it look, they don’t have a plan.”

As it turned out, Ken Kurson, a friend of Kushner’s who served as editor-in-chief of the New York Observer when the Trump aide was publisher, had a connection to Ice Cube. Kurson had known Ice Cube’s business partner Jeff Kwatinetz since the 1990s, when Kurson was bassist for the Chicago indy rock group Green.

In August, Kurson sent Kushner a text message. Forging a partnership with Ice Cube, he wrote, could be a plus for the White House. Kurson, whose website tracks the music scene, noted that Ice Cube had major sway in the Black community, adding that he considered N.W.A’s 1988 album “Straight Outta Compton” — Ice Cube was a core member of the gangsta rap group — “to be a work of American genius on par with” F. Scott Fitzgerald’s “The Great Gatsby” and George Gershwin’s “Rhapsody in Blue.”

Kwatinetz, who’s represented the likes of Jennifer Lopez and Enrique Iglesias and is a former business partner of former Trump strategist Steve Bannon, was invited to the White House in early September.

Participants said the multihour discussion focused on policy and didn’t touch the campaign. Kwatinetz lobbied for Ice Cube’s proposal, stressing that he was particularly focused on addressing the wealth gap between African Americans and whites.

Over the Labor Day weekend, Kurson and his wife invited Kwatinetz to Bedminster. Kushner stopped by their table to chat as they ate.

Democrats, too, were interested in cultivating the rapper. On Sept. 8, Cube and his team had a conversation over Zoom with Biden’s campaign, which was represented by Louisiana Rep. Cedric Richmond, Atlanta Mayor Keisha Lance Bottoms and senior adviser Symone Sanders.

But Ice Cube’s team left with the impression that Biden’s team was less committed. According to a person familiar with the discussion, Biden aides told the rapper they agreed with much of his plan but that they wouldn’t engage more fully until after the election.

Kamau Marshall, the Biden campaign’s director of strategic communications, did not deny the account but said Trump “does not have a record to stand on when it comes to the Black community.”

As September wore on, Ice Cube and his advisers continued to lobby the White House during conference calls. On Sept. 14, the performer and his representatives — again not eager to be seen at the White House — quietly met in a Washington hotel with a group of Trump aides including Kushner, Ja’Ron Smith, and Brooke Rollins. Ice Cube’s group had prepped for the meeting by consulting with Claud Anderson, a Black economist and author who has argued that African Americans are being served poorly by both parties.

In the following days, Ice Cube’s team continued to hash out ideas with the White House and eventually elicited a promise of $500 billion in funding to be included in Trump’s election-year plan.

But that was hardly the end of it.

On Oct. 11, Cube released a video in which he made clear that he wasn’t endorsing Biden or Trump. But he expressed criticism of Democrats, saying they hadn’t done enough to put forward a plan for African Americans, while noting that Trump had altered his proposal after receiving input from him.

Acknowledging he’d been under pressure, Ice Cube added: “Everybody’s been mad at me because I haven’t been on … the gravy train of these candidates, especially Joe Biden and [Kamala] Harris.

Then, on Wednesday, Trump adviser Katrina Pierson announced that Ice Cube had played a role in developing the administration’s plan. Many of his supporters expressed shock, especially considering that in 2016 he said he would “never endorse” Trump and that in his 2018 song “Arrest the President,” he called Trump “Russian intelligence.”

Responding to a Twitter user who accused him of “working with the Darkside,” Ice Cube argued that it was incumbent upon African Americans to negotiate with whoever could make a difference for them.

“Every side is the Darkside for us here in America,” he wrote. “Our justice is bipartisan.”

Ice Cube isn’t the only Black cultural figure playing a role in the race. Rapper and fashion designer Kanye West, whose wife, Kim Kardashian West, has been involved in the White House’s criminal reform push, is waging a third-party presidential bid and has qualified for the ballot in several states. Republican operatives have been helping West’s campaign, stoking speculation they are trying to siphon off Black votes that would otherwise go to Biden.

Kushner confirmed that in August he met with West in Colorado, though Trump aides have denied they are propping up the rapper’s candidacy. Like Ice Cube, West offered advice in the crafting of the new Trump proposal, according to a person familiar with the deliberations.

Another major figure, billionaire BET founder Robert Johnson, recently took to CNBC to hint at his support for Trump in the election.

Doubts remain, however, whether Trump will succeed in his push for Black support. An NBC News/Wall Street Journal survey released Thursday shows Biden leading the president 91 to 4 percent among African American voters, representing a decline in support since 2016.

But Ice Cube appears unbowed. On Twitter Thursday morning, he stood by his decision to work with the White House.

“Talking truth to power,” he wrote, “is part of the process.”